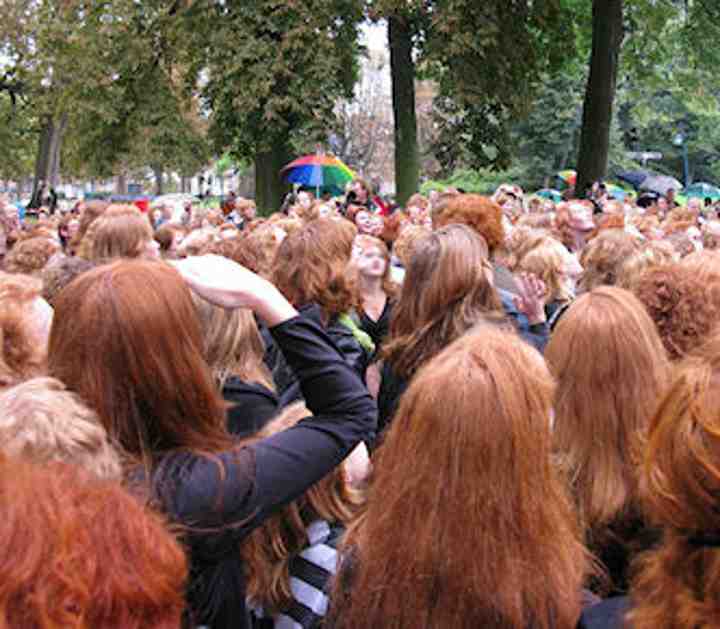 If you describe something as ambiguous, you mean that it is unclear or confusing because it can be understood in multiple ways.

When you correlate two things, you compare, associate, or equate them together in some way.

A situation or thing that is discordant does not fit in with other things; therefore, it is disagreeable, strange, or unpleasant.

Things that are disparate are clearly different from each other and belong to different groups or classes.

When there is a disparity between two things, they are not of equal status; therefore, they are different or unlike in some way.

Dissonance is an unpleasant situation of opposition in which ideas or actions are not in agreement or harmony; dissonance also refers to a harsh combination of sounds.

A distinctive trait of someone sets them apart from everyone else—it is what makes them different or unique.

A diverse group is made up of various and different things.

Something that is divisive is likely to cause arguments between people.

An echelon is one level of status or rank in an organization.

An eclectic assortment of things or people comes from many varied sources; additionally, it usually includes the best of those sources.

Ecumenical activities and ideas encourage different religions or congregations to work and worship together in order to unite them in friendship.

If you exhibit equanimity, you demonstrate a calm mental state—without showing upset or annoyance—when you deal with a difficult situation.

Heterodox beliefs, ideas, or practices are different from accepted or official ones.

A heterogeneous grouping is made up of many differing or unlike parts.

Something humdrum is dull, boring, or tiresome.

Something that is immutable is always the same and cannot be changed.

Something that is incongruous is strange when considered along with its group because it seems very different from the other things in its group.

An inconsistency is something that does not quite fit with the rest of the members of its group because it is irregular or self-contradictory.

An innovation is something new that is created or is a novel process for doing something.

Two irreconcilable opinions or points of view are so opposed to each other that it is not possible to accept both of them or reach a settlement between them.

A monochrome painting is comprised of different shades of only one color or is done in black and white.

An organization or system that is a monolith is extremely large; additionally, it is unwilling or very slow to change or adopt something new.

Something that is multifarious is made up of many kinds of different things.

An ornate object is heavily or excessively decorated with complicated shapes and patterns.

If an object oscillates, it moves repeatedly from one point to another and then back again; if you oscillate between two moods or attitudes, you keep changing from one to the other.

A smorgasbord is a wide variety of things, generally but not always pertaining to a sizable buffet.

A variant form of something differs from the normal state because it has changed in some way.

Something that is variegated has various tones or colors; it can also mean filled with variety.

If you waver, you cannot decide between two things because you have serious doubts about which choice is better.

Rachel thought that the “popular crowd” at school looked and acted alike, seeming completely homogeneous or identical. This group of girls wore the same kind of clothing and fixed their hair in the same, homogeneous style. They even spoke in a similar, homogeneous tone of voice that seemed to end every sentence with a lilt, as if they were always asking questions. With her short, dark hair and thrift store clothes that she had redesigned, Rachel was glad not to match the homogeneous crowd which to her looked like paper dolls.

Quiz: Try again! When is a group homogeneous?

When parts of a whole “resemble” the “same kind, type, or class” as other parts, they are said to be homogeneous.

Being John Malkovich The people at this restaurant are homogeneous. 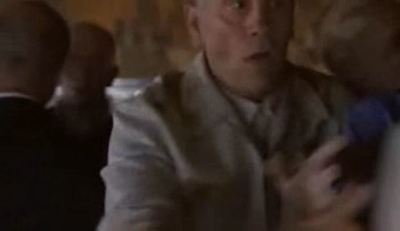 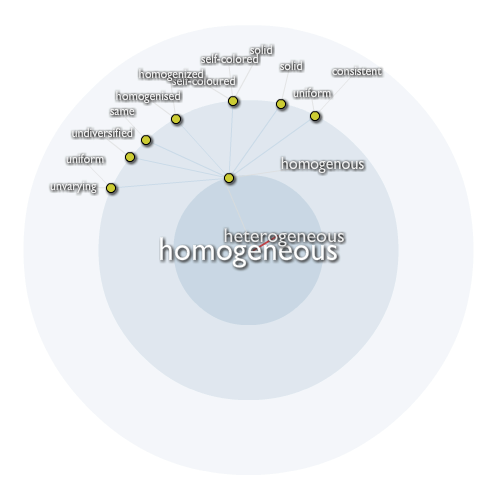