If you acquiesce to something, you allow it to happen by doing what someone wants without putting up a struggle or voicing your own concerns.

If you are bellicose, you behave in an aggressive way and are likely to start an argument or fight.

A belligerent person or country is hostile, aggressive, very unfriendly, and prone to fight.

Someone who is boisterous is noisy, excitable, and full of boundless energy; therefore, they show a lack of disciplined restraint at times.

If you describe a person’s behavior as brazen, you mean that they are not embarrassed by anything they do—they simply don’t care what other people think about them.

If someone is complaisant, they are willing to please others and do what they want without complaining.

Someone who is contumacious is purposely stubborn, contrary, or disobedient.

Someone who is craven is very cowardly.

If you behave with deference towards someone, you show them respect and accept their opinions or decisions, especially because they have an important position.

If you describe someone, usually a young woman, as demure, you mean that she is quiet, shy, and always behaves modestly.

An animal or person that is docile is not aggressive; rather, they are well-behaved, quiet, and easy to control.

If someone is fractious, they are easily upset or annoyed over unimportant things.

Someone who is incorrigible has bad habits or does bad things and is unlikely to ever change; this word is often used in a humorous way.

Intractable problems, situations, or people are very difficult or impossible to deal with.

If someone is being obsequious, they are trying so hard to please someone that they lack sincerity in their actions towards that person.

If something obtrudes, it becomes noticeable or attracts attention in a way that is not pleasant or welcome.

Something that is pliant is adaptable and can bend easily without breaking.

To be politic in a decision is to be socially wise and diplomatic.

To propitiate another is to calm or soothe them; it is often giving someone what they want so that everyone is happy.

A raucous sound is unpleasantly loud, harsh, and noisy.

A recalcitrant animal or person is difficult to control and refuses to obey orders—even after stiff punishment.

Refractory people deliberately don’t obey someone in authority and so are difficult to deal with or control.

Something that is regimented is organized and controlled by strict rules.

A restive person is not willing or able to keep still or be patient because they are bored or dissatisfied with something; consequently, they are becoming difficult to control.

If you say that someone is servile, you don’t respect them because they are too obedient, too agreeable, and too willing to do anything for another person.

Skittish persons or animals are made easily nervous or alarmed; they are likely to change behavior quickly and unpredictably.

A strident person makes their feelings or opinions known in a forceful and strong way that often offends some people; not surprisingly, a strident voice is loud, harsh, and shrill.

If you are subservient, you are too eager and willing to do what other people want and often put your own wishes aside.

A tacit agreement between two people is understood without having to use words to express it.

A taciturn person is quiet or silent by nature.

A tempestuous storm, temper, or crowd is violent, wild, and in an uproar.

A truculent person is bad-tempered, easily annoyed, and prone to arguing excessively.

A tumultuous event or period of time is filled with great excitement, confusion, or violence; a tumultuous reaction to something is likewise very loud and noisy because people are happy and excited.

Someone who is unassuming is not boastful or arrogant; rather, they are modest or humble.

A feeling that is unbridled is enthusiastic and unlimited in its expression.

If someone acts in an unobtrusive way, their actions are not easily noticed and do not stand out in any way.

Something or someone that is unprepossessing is not impressive or is unattractive.

Someone who is vociferous expresses their opinions loudly and strongly because they want their views to be heard.

Extra security was needed at the rock concert to control the disorderly, loud, and obstreperous fans, but luckily things didn’t get out of hand. Although the obstreperous audience was aggressive, stubborn, and not easily controlled, the security members were able to keep the crowd at a dull roar. Things were not made easier by the fact that the rowdy band was known for its own immature, rebellious, and obstreperous behavior during concerts.

Quiz: Try again! When is someone considered obstreperous?

Perilous Obstruction The obstreperous crowd was so uncontrollable and unruly that it proved to be a perilous or dangerous obstruction to the soccer teams' safety, so riot police had to be sent in to control the obstreperous fans, who were noisily and aggressively shouting about a bad call by the referee.

An obstreperous football fan “possesses the nature of thoroughly making a din or shouting noisily.” 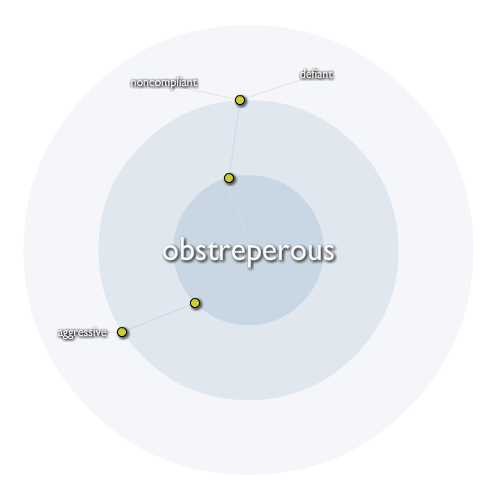